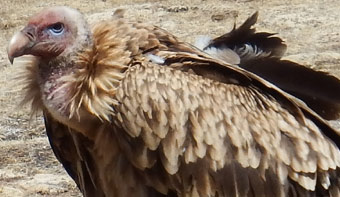 There are many reasons that vultures are increasingly endangered; worldwide they are hunted for meat or traditional ‘medicine’, are poisoned purposefully because they alert authorities to poached kills, die when eating poison-laced bait meant for other predators. They’re poisoned when eating lead used by hunters and shot because they are blamed for livestock deaths (most of the time, unfairly). They hit electrical lines or wind turbines, get hit by cars (often when trying to clean up roadkill), and they starve to death in spreading industrialized, urbanized areas where livestock is increasingly kept in confinement and wild prey has disappeared.

Vultures suffer habitat loss because of human activity, and habitat degradation by chemicals such as DDT and other pesticides, which can result in fatally thin eggshells or build up over time to weaken adult birds. In India, the catastrophic downfall of vultures is thought to be caused chiefly by a single, widely used veterinary drug, a cattle painkiller called diclofenac. The combination of all these factors, and many others, account for the drastic reduction in global vulture populations. They should be seen as a dramatic call-to-action; we need to conserve these birds before they are lost forever.